Mima and KongKong – what my daughter calls my husband’s parents – were here for the entirety of the holidays. They are based in Butuan City. 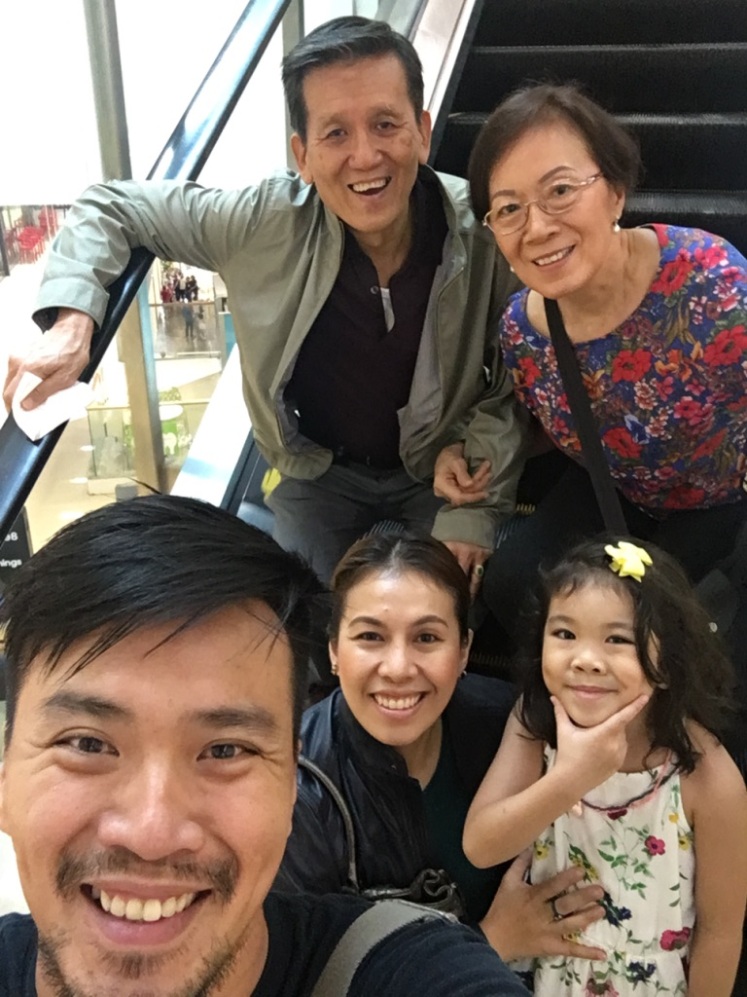 These visits mean plenty of mall time and eating out. Not that they are especially fond of eating out because while they do enjoy it, they also have a myriad of health concerns to consider. A big part of opting to dine out boils down to avoiding the tediousness of it all when in comes to cooking, setting the table, putting everything away and washing the dishes and pots and pans while the household help is also away on holiday break.

The things that shapes our decisions these days (hahahuhu). There was a part of me that wanted to do it – do a real holiday spread at home, you know, buy the red table cloth, get some table napkins, sear some steaks – but to do ALL the cooking and then ALL the cleaning up by my self? Or subject my mother-in-law to that kind of tedious labor while she’s on holiday simply because she’ll never let me do the clean up by myself? Simply unconscionable. 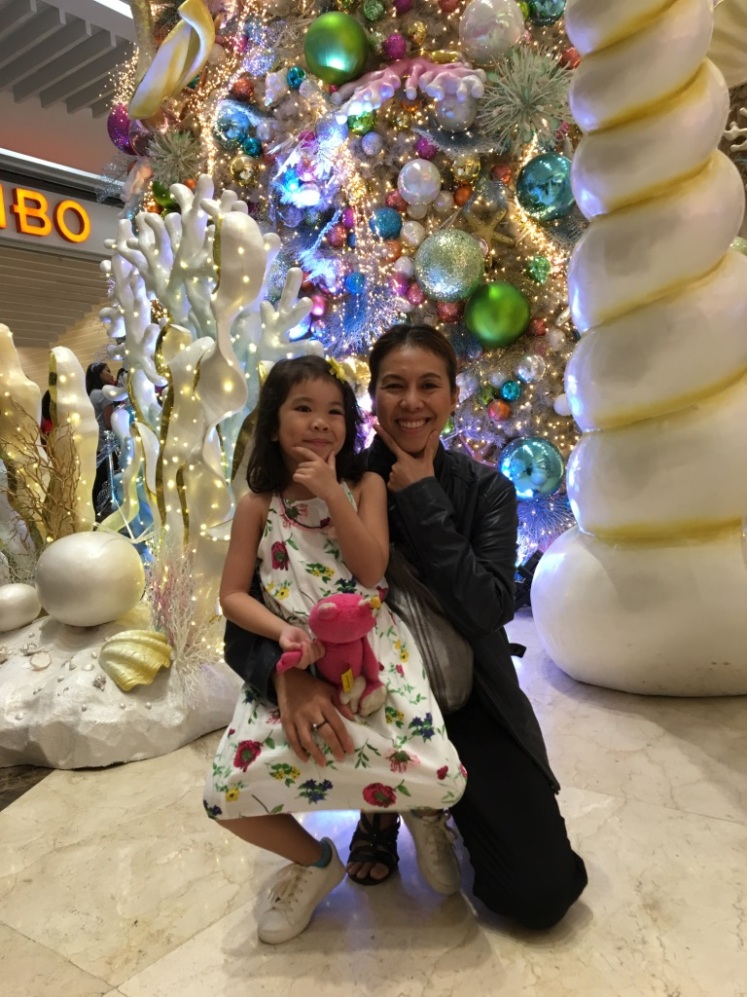 With that, I tried to steer us towards restaurants that would have more healthful or lighter options. For instance, my salmon loving in-laws were pleased we ate in Cibo for Christmas lunch (not just Aki, haha).

They’re not fond of pizza and pasta – Cibo’s staple draw – and would usually settle for a soup and sandwich pair. But if you’re feeling hungrier or you want some rice, take a cue from Mima and KongKong and try the entrees. They might be significantly pricier than the pasta, pizza or paninis, but they will not disappoint. 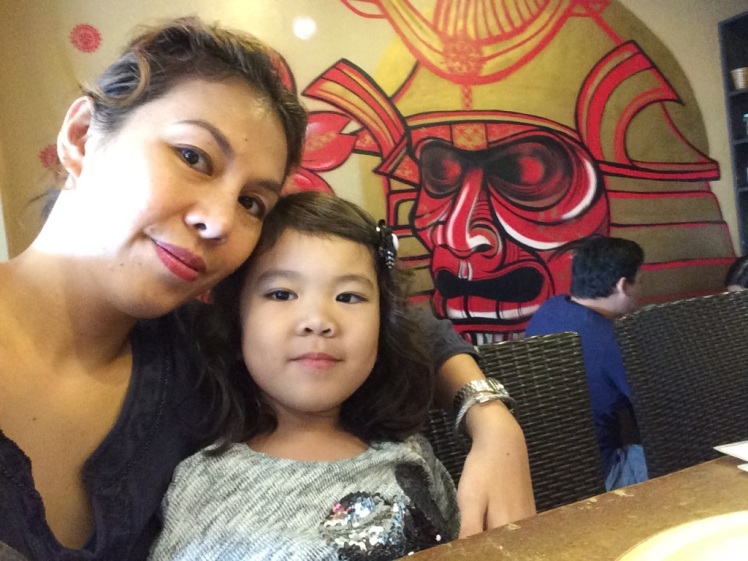 Another thing that they love while they are in Manila is to have Japanese food. Our requisite Nihonbashitei visit didn’t happen this year – they were always full! – and they were less than impressed when we took them to Isshin. We made it up with them with a return visit to Sensei. We were back on their good graces, just like that.

Sensei is such a win for us because we couldn’t care less about ambience if the food is amazing (it has consistently been so). They also happen to incorporate plenty of vegetables in their dishes, which is their biggest advantage over the more traditional Japanese restaurants, in my opinion. Just check out this glistening plate of salmon misoyaki. The cucumbers are as crunchy as they look: 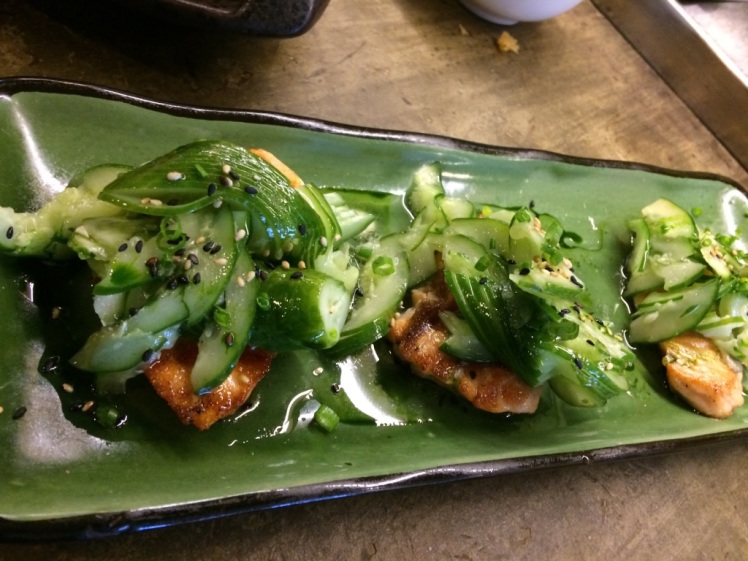 I also ordered the Senseiviche and the Sensei kani salad, which had an abundance of lettuce instead of cucumber strips – a hit with my in-laws and I. Safe picks for kids are the ebi tempura, chicken karaage and chicken popcorn.

Nowadays, my in-laws standard for miso soup is Sensei’s. The restaurant has become an official family staple. 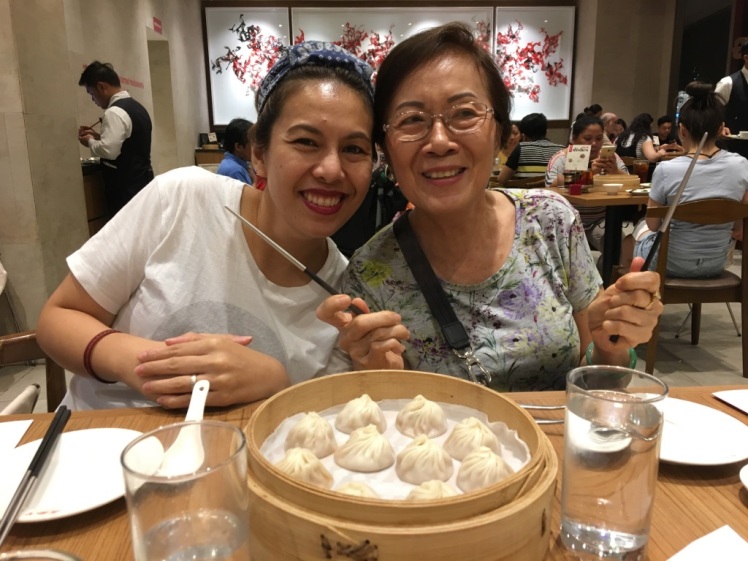 Except for J, it was all our first time to try Din Tai Fung. Some things truly are worth the wait.

The queue can be quite unbelievable at times, but the dining experience is a notch up from similar establishments. To be honest, I don’t see much point in going back to Shi Lin anymore since we’ve been here. 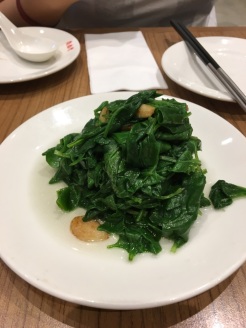 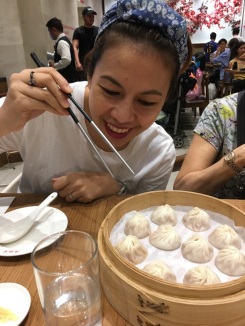 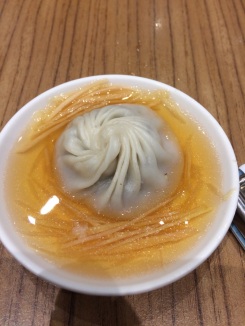 As for dessert, I give my daughter full props for knowing her stuff because the chocolate xiao long bao is ridiculously good. 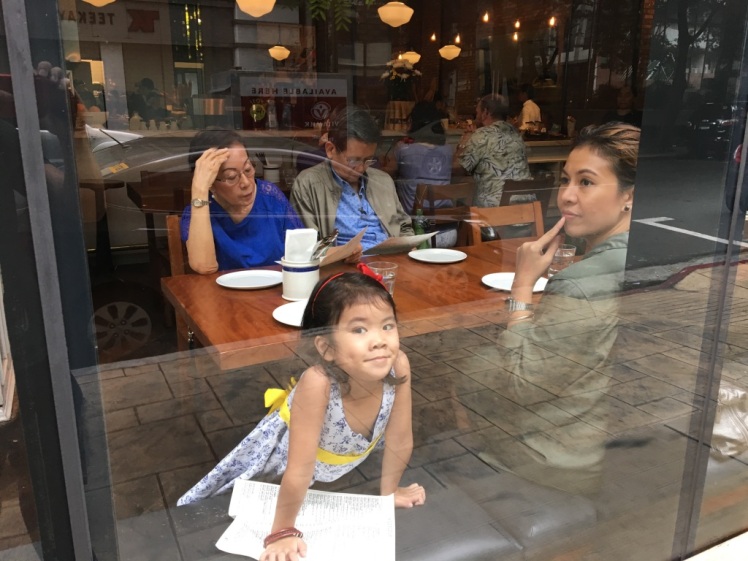 When it comes to western food, Cibo is looking like the best option for my in-laws. Wildflour was a case of something we like vs what they like. 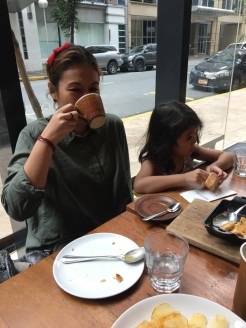 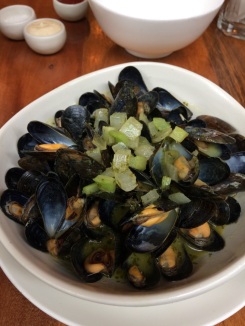 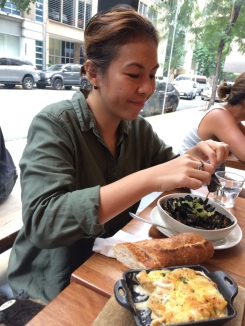 Note to self not to bring them here again except maybe for coffee or dessert. Note to self also to come back for the mussels. Sad that the mussel pieces were small, but Wildflour mussels is definitely in my top 3 favourite anyway. Simply delicious. 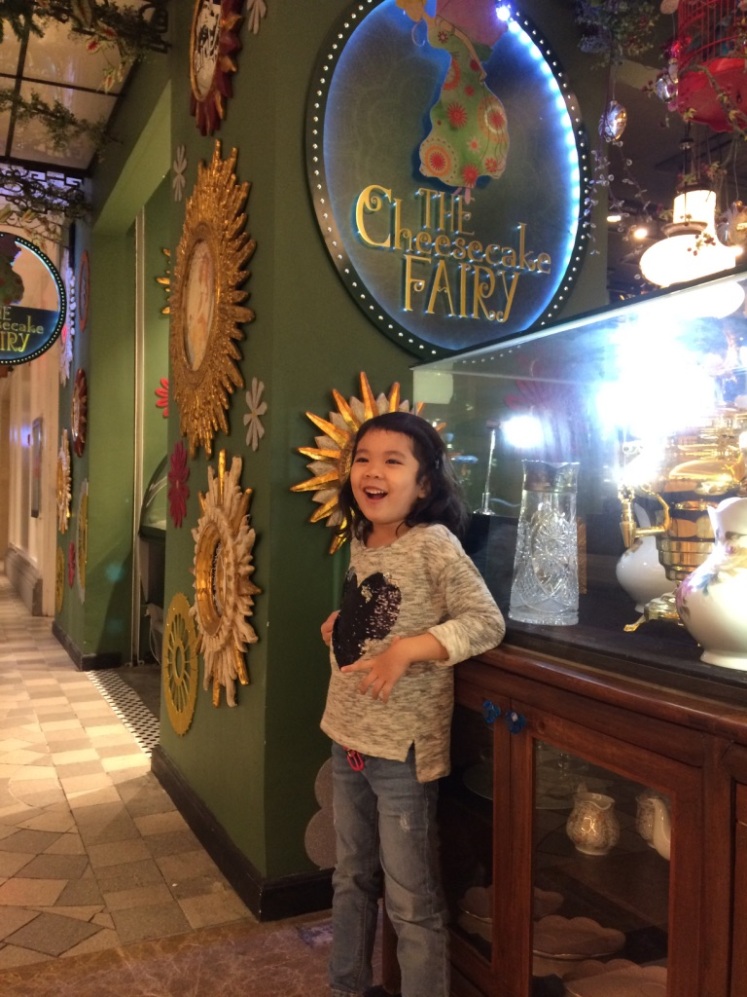 This could very well be the little girl’s pick.

The Cheesecake Fairy makes for a cozy stopover for cakes, coffee, pastries, and gelato, especially if it’s your first time in Evia like Akira’s grandparents. Unfortunately, they are trying to limit their sugar intake and there was no sugar-free option, so we only had coffee (in such pretty cup sets, no less).

I was also trying to limit Akira’s dessert and chocolate intake – a huge challenge over the holidays – so instead of a slice of chocolate cake, we opted for a fudge bar. It was rich and chocolate-y so I’m sure we will be back to try their other offerings. 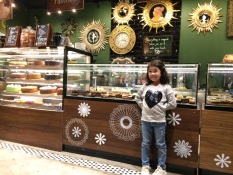 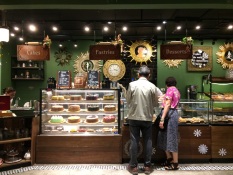 Food tripping can be great fun but nothing beats home cooked food if the cook is quite capable (I’d like to think I am, thanks!) and if you want to eat healthier. On Mima and KongKong’s last day with us, I thought they deserved a nice, simple meal at home. I settled on cooking sole fillets (steamed for them, tonkatsu-style for us) and Taiwanese pechay with oyster sauce. 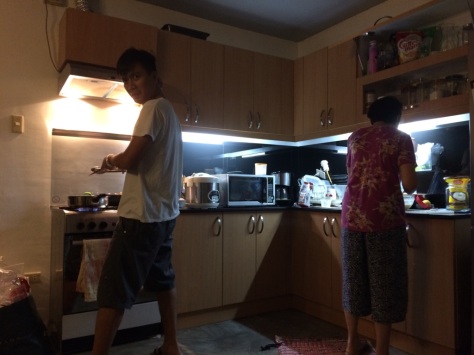 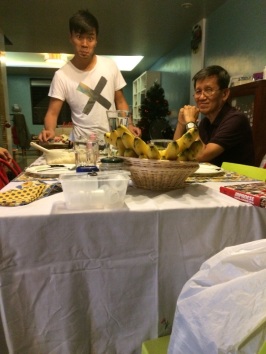 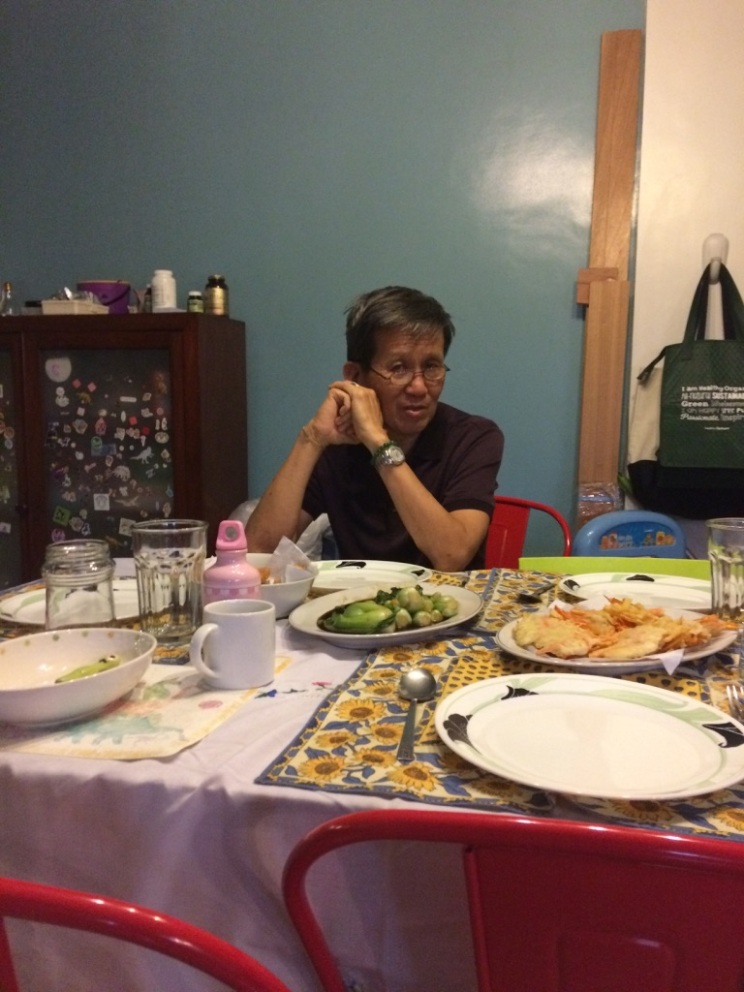 These home pictures were all taken by Akira using my iPhone. J balked at the sight of her taking a photo of her food. 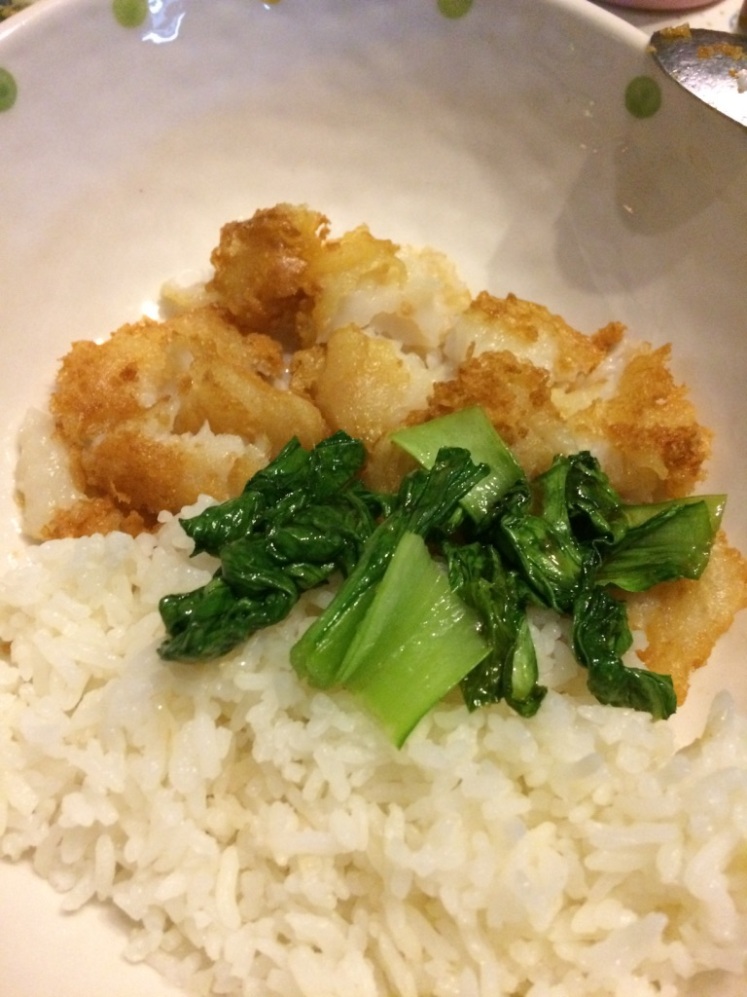 I didn’t see it for myself because in the midst of prepping I got hit with a sudden dizziness spell. For no apparent reason, just like that, my worst case scenario happened: Mima ended up taking over frying the fish, and most of the washing. 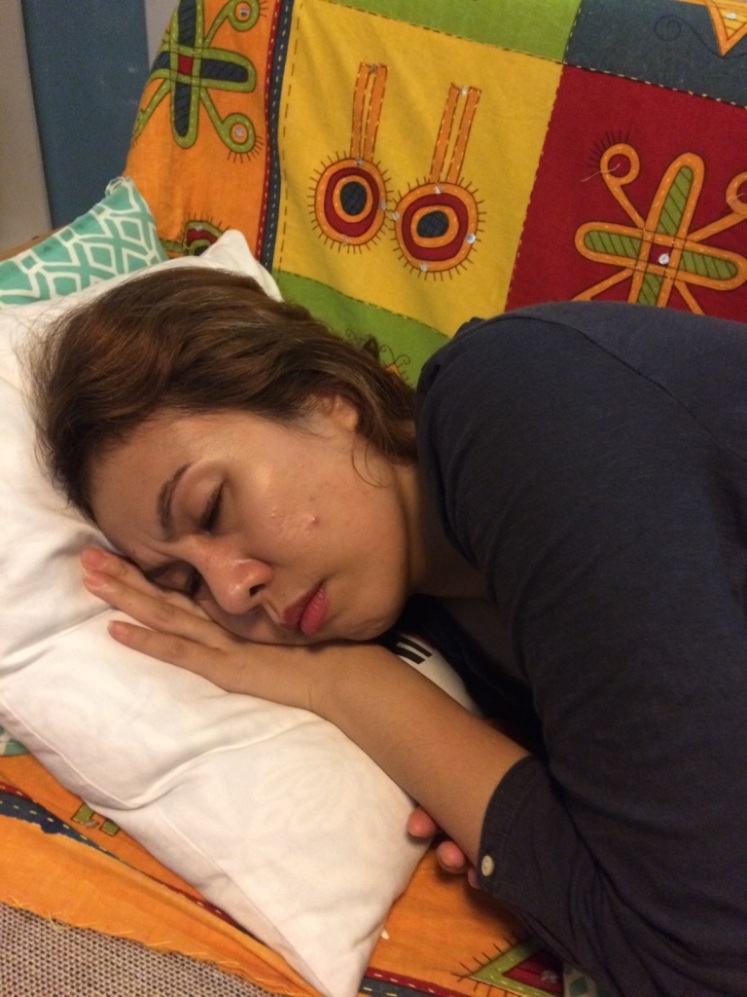 The stove was an oil splattered disaster area, and there was a mountain of things to wash. Of all things, right? Sigh.

Biogesic came to the rescue, and I managed to take on the dishwashing, solo, but Mima took over the stove. It’s terribly embarrassing – I really would’ve been fine left by myself but help is help so I’m also thankful but still, I wish she didn’t. If it’s any consolation to me, dinner was good.

These dining ventures were outside of Noche Buena and New Year’s Eve, of course. So where did we go for these special occasions, and how did we find the food? More on holiday eating with a fine dining twist on the next post 🙂

3 thoughts on “Eat your way through the holidays”