Aside from the house, one other thing that suffered from the lack of household help was my yoga practice.

Just when I managed to find a yoga studio that felt like home, met some really nice people, and hung out a lot with a good friend as we worked on our practice together, it sucked to not have much of a choice and to let all that go.

Join Teacher Karina's classes if you're looking to build strength and see visible progress. She teaches Ashtanga Vinyasa on Tuesdays at 5:00 PM, Thursdays at 6:45 PM, and Sundays at 4:00 PM. All levels are welcome, including beginners. For more information, visit www.treehouseyogaph.com. — Resposting from @yogawithkar – Full house: A glimpse of the family tree ❤️🌳 #yoga #yogaphilippines #treehouseyogis

May. The last time I got tagged in my home yoga studio’s Instagram account. Four months ago as of writing 😦

I’d sweat buckets cleaning the house, yes, but exercise it is not. Not to digress, but take it from my mother-in-law who was told by her doctor that in spite of the sweat and effort (because the tiredness is real, as we know very well), doing household chores does not replace exercise.

Live Science cites a study from Northern Ireland that found people who reported housework as part of their weekly exercise tend to be heavier than others who exercised in more traditional ways.

I also realized that my daughter’s odd school hours and thrice-weekly extra curriculars added to the difficulty of going to the yoga studio to practice. I felt bad about whatever progress I felt I’ve made and thought it’s all gone, back to zero.

Getting back into the yoga habit

So maybe, as the song goes, yoga’s a hard habit to break. I managed to go back to my practice – at home. I can’t recall when I picked it up again exactly, but I revisited my go-to Popsugar Fitness yoga videos, and started doing one video at a time. The next times, when I was feeling more up to it, I’d combine two videos as one workout session.

I’d usually  start with this:

And end with this:

That’s how I discovered Travis Eliot. This brief video he did for Popsugar Fitness made my core ache (and I liked it haha) so I looked for more of his videos in YouTube.

In Treehouse, there’s a Power Hatha class. This video reminded me a lot of it. I can only do it properly after some coffee, it’s quite challenging as a workout.

He says it himself in the video, there’s not a lot of ‘hard’ poses but the intensity is there. There’s also a ton of pushups, good grief.

Nevertheless, this is the first yoga video I followed that isn’t from Popsugar Fitness and I was elated to discover a yoga class setting in a video, complete with shavasana (corpse pose). It’s the closest thing to being back in class. It seems more likely now that it can be done, to steadily build a regular yoga practice again.

I decided to try this one next:

In my opinion, the sequence here is just right. This can be a regular yoga at home practice.

It starts and ends properly, and by that I mean it’s not abrupt. There’s no peak pose here either, but there are some parts where I still hit the space bar to pause and just do a child’s pose.

With these two videos I noticed that what the teacher usually does is to begin with a sequence that’s long drawn out – each pose is held for a long time. After a round or two of that, it’s time to do it per breath – the flowy version. Once I caught on, I was able to follow the videos better.

The thing about doing yoga at home alone is that there are a lot of distractions. If it’s not the kid, it’s the animals. Or something else. But I must admit, the kid and the animals are adorable distractions 🙂 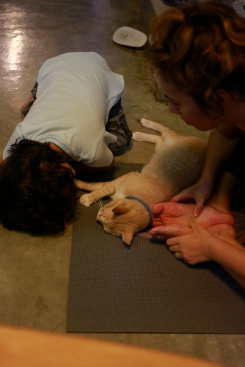 It helped a lot to look for a quieter spot in the house, so the distraction that I have to address more is a random notification or something from my phone. Or intermittent Internet connection. Takes long for the video to load or it doesn’t play straight sometimes.

At home, I can definitely say it’s my practice. I can practice in my skivvies or have armpit hair or be in ratty house clothes and not have a care in the world. The focus is on the video, the practice. It. Is. Liberating. Especially now that I found good videos I can actually follow from start to finish. 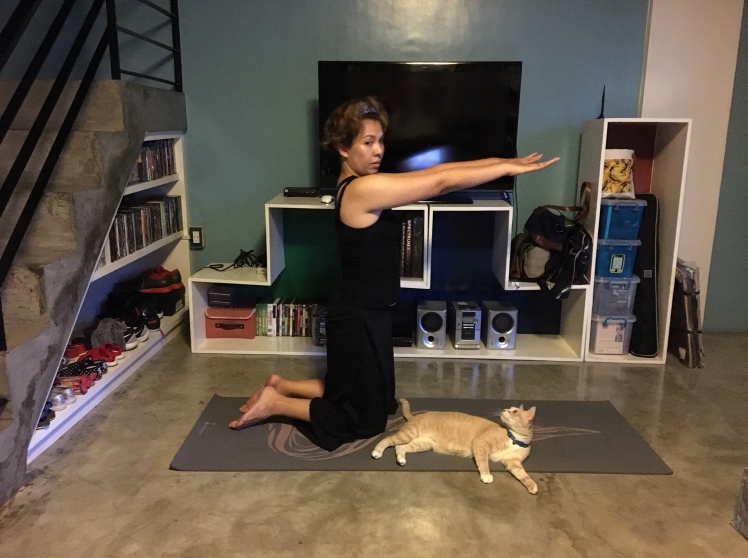 It would be nicer though if we had bigger mirrors at home so I can check my form. And I wish I’d remember to drink more water after practicing at home – I don’t know why I don’t.

Practicing in a studio 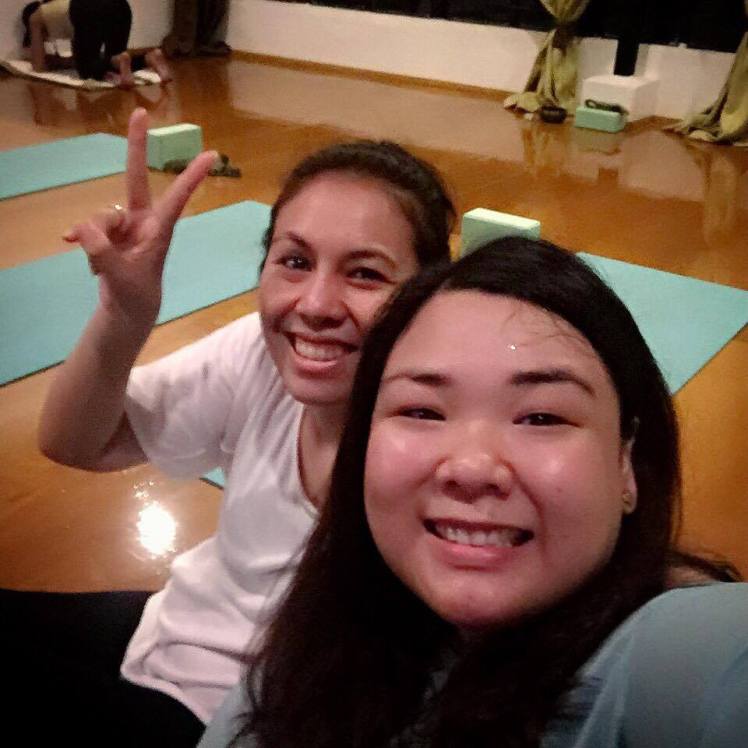 On the other hand, I love going to class in a studio because a group can do wonders in giving that extra push. Sometimes it’s an entire class that seems to be on warrior mode, and sometimes there’s just a person or two in front that is doing such a graceful, beautiful practice, it’s simply inspiring.

Of course there’s also a teacher present to correct my alignment or give that gentle yet firm nudge to go a little deeper, take it a little higher, or to just simply go for it and try a ‘difficult’ pose. I don’t think I’ll ever be able to try and do a headstand at home by myself, for instance.

Treehouse Yoga also just happens to be a beautifully serene place. When the breeze blows gently into the studio, when you’re practicing as the sun is setting into the horizon, or when a gentle rain starts to fall while the class winds down – the studio just enhances the practice for some magical reason.

For now, I am just relieved that yoga at home seems to be working for me. The beauty of the thing is that there are so many teachers online too, and the classes are labeled and bracketed in easy-to-file ways, whether it’s ’30-minute Yin’ or ‘yoga for hangovers’ so it’s a matter of sifting through YouTube.

I just got a link for the video that my friend does when she practices at home, and then I saw a recommendation for Tim Senesi videos in one of the YouTube comment threads, so there are those to check out too.

With that, I just hope to not neglect the house too much or rely on canned goods for food while still committing to a progressive and meaningful practice. Maybe I’ll do a video to commemorate a solid practice – no pauses, no clunky chaturangas – but all in good time. Namaste 🙂

3 thoughts on “Yoga at home”